An ambitious young man, Joe Lampton (Laurence Harvey, The Manchurian Candidate), has finally landed a good job far away from his rickety hometown. Joe realizes quickly that this “9 to 5” job isn’t going to get him where he wants to be, so he sets his eyes on the daughter of the town’s wealthiest person.

“Don’t worry about the way the world’s run… Enjoy it while you’re young.”

Room at the Top is part of the so-called British New Wave of late 1950s and early 1960s, which include Look Back in Anger (1959), This Sporting Life (1961) and Billy Liar (1963). All these films were meant to echo white blue-collar angst. In my opinion, Room at the Top is not only well-crafted but also uncannily preceptive. 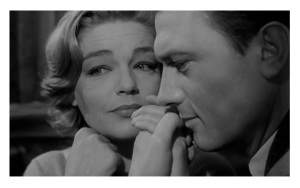 Room at the Top is technically vibrant. First-time director Jack Clayton (Disney’s Something Wicked This Way Comes), with the help of ace cameraman Freddie Francis (The Elephant Man), manages to create something that’s both stylish and realistic, a decidedly hard hat trick to pull off  — the film’s matter-of-fact approach to real-life situations is backed up by an extraordinary sense of style.

Room at the Top is also a gutsy movie. The film goes against cinema’s long-held tradition of romanticizing the working-poor. In fact, the blue-collar guy is the most despicable character in the entire film. He’s an anti-hero in every sense of the word. Room at the Top subverts the audience’s expectations in other ways too. The film blurs the lines between villains and heroes, giving most characters good/bad traits.

The brilliant, Oscar-winning script by Neil Paterson (Man on a Tightrope), based on a novel by John Braine, also makes an interesting connection between misogyny and social mobility — the film explores the idea of men achieving success at the expense of women. That’s another curious take on social inequality, which makes me wonder how much sympathy the film really has for the “angry white male.”

Room at the Top is superbly acted across the board. Laurence Harvey is dynamite as the ruthless social climber. Harvey’s character isn’t your typical gold-digger, though. He’s driven by personal demons and insecurities that are all-too-familiar to many of us — despite his abhorrent behavior, Harvey’s Joe comes across as very human. Harvey is trying to buck an unjust social system where destiny is predetermined at birth.

Simone Signoret is radiant, earthy and sublime as Harvey’s older lover. She deservedly won the Best Actress Oscar. Her expressive eyes telegraph every deep emotion. Signoret comes and goes out of the narrative — after all, this is Harvey’s film all the way — but she makes every moment of her screen-time count. The scenes between Signoret and Harvey are filled with intensity, intelligence and romance.

Celebrated British actor Donald Wolfit (Lawrence of Arabia) also gives a powerful performance as Mr. Brown (Wolfit was the inspiration for Ronald Harwood’s famous play The Dresser, which was filmed in 1983 with Albert Finney as Wolfit). Interestingly, Hermione Baddeley (Mary Poppins) received an Oscar nomination for her role as Signoret’s best friend. I believe it is the shortest performance — three short scenes that amount to less than three minutes — to be nominated for an acting Oscar. Heather Sears (The Story of Esther Costello) plays Harvey’s unsuspecting victim.

Bleak and cynical, Room at the Top is the antithesis of Frank Capra’s blue-collar utopia. This film avoids picking sides, spreading the blame on socio-economic problems everywhere, not just on the lap of the powerful and rich. If you are looking for a film that makes you feel good about being part of the work force, look elsewhere. The film slaps you with truths that none of us really want to hear — it’s incredibly powerful and timeless in that regard. B&W, 115 minutes, Not Rated.