In 1911, during the coronation of the King of England George V., the Prince Regent of Carpathia (Laurence Olivier, Wuthering Heights) tries to kill time by seducing a chorus girl (Marilyn Monroe, Some Like it Hot) he just met. Unfortunately for the Prince, what was intended as a one-night relationship turns into a complicated mess when the girl in question inadvertently gets involved in his political affairs.

Marilyn Monroe has been rightly identified by many as probably the biggest sex symbol of all time. More than five decades after her death, she has been able to transcend the film medium and become an American icon revered by many people all around the world. 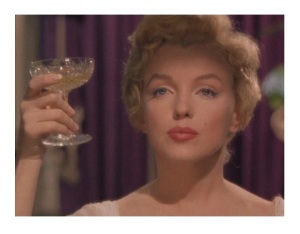 Despite Monroe’s almost mythical legendary status, knowing what we now know about her, I don’t think she would have been too pleased with her current position as the # 1 sex symbol of all time. It’s true that in the early 1950s, while she was trying to achieve notoriety, Monroe willingly exploited her beauty and sex appeal, but once she solidified her position as a star, she genuinely attempted to become a serious actress.

After the success of Billy Wilder’s sex farce The Seven Year Itch (1955), Monroe began taking acting classes at the famous Actor’s Studio and demanding more challenging roles from her Alma mater, Twentieth Century-Fox. Bus Stop (1956) was the first film to give her an opportunity to display her unique gifts as an actress, but despite that film’s critical and commercial success, Fox was not interested in promoting her as a dramatic actress. Displeased with the studio’s attitude, she took control over her career. Monroe then formed her own production company and decided to look for the right material to suit her more developed acting skills. 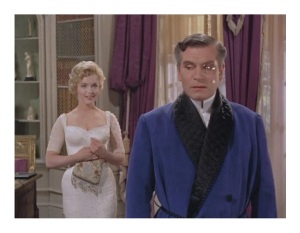 Directed by actor Laurence Olivier from a screenplay by Terence Rattigan based on his 1953 play The Sleeping Prince, The Prince and the Showgirl became the first movie produced by Monroe’s company, and unfortunately for her, the film failed with both critics and audiences, giving a serious blow to her already fragile new-found confidence. The failure of the movie, despite the presence of Olivier as an actor and director, momentarily derailed her aspirations of becoming a serious actress, and she returned to the “dumb blonde” roles she was famous for.

Today, it’s hard to understand Monroe’s enthusiasm towards this film project — despite the pedigree of all artists involved in the production, the truth is that The Prince and the Showgirl is not a good film. The movie contains some funny vignettes, but not enough to salvage a superficial and uninteresting storyline. Monroe looks ravishing, but her beauty is not enough to hold one’s interest for almost two hours.

Interestingly, Monroe is much better than Olivier, who is strangely mannered and over the top. It’s ironic to say the least that an actress so insecure about her acting ability acts circles around one of history’s greatest actors. I was also taken aback by Olivier’s subpar work as a director. Famed cameraman Jack Cardiff (Black Narcissus, The African Queen, etc.) comes up with some lovely close-ups, but he cannot overcome Olivier’s anemic direction. Rattigan’s once witty and charming play becomes a pointless and very slow movie in the hands of director Olivier — the great Shakespearean actor keeps things moving at a snail pace, failing to disguise the film’s stage origins.

Many of the plot twists are unbelievably corny, leaving Monroe’s beauty and charisma as the only things that keep the film from completely sinking. Despite Monroe’s lively performance, it seems strange that she chose this material as her first venture as a producer — she plays a not-too-bright character, not the role you will expect from someone desperate to find more challenging material. The Prince and the Showgirl is a handsomely put together film, but too shallow to completely succeed as a romantic comedy; this film is definitely second-rate Monroe.

In retrospect, it is easy to see why The Prince and the Showgirl failed at the box office. First, we have the strange paring of Monroe and Olivier — an odd combination that simply doesn’t work. There is absolutely no chemistry between the stars, and the spark that should have been generated from this owl-and-pussycat combination is totally absent from the final product. However, if you are a fan of the beautiful Monroe, you don’t want to miss an opportunity to see the actress at her most charming and beautiful. For the regular movie buff, this is a movie that you will probably want to skip altogether. The film would make a fascinating double-feature with the excellent 2011 film, My Week with Marilyn, which revolves around the movie’s behind-the-scenes problems. Color, 115 minutes, Not Rated.