A Serbian artist living in New York, Irena Dubrovna (Simone Simon, The Devil and Daniel Webster), falls in love with a mild-mannered engineer, Oliver Reed (Kent Smith, The Fountainhead). They get married, but the marriage goes unconsummated for months because Irena is convinced that sexual arousal will transform her into a wild cat. Oliver thinks his wife is simply having psychological problems, but…

“Oliver, be kind. Be patient. Let me have time. Time to get over that feeling there’s something evil in me.”

If you consider the time it was filmed, Cat People is a mightily gutsy, extremely frank, and surprisingly scary horror movie — this multi-layered “monster flick” is characterized by both an incredibly ominous atmosphere and tantalizing sexual tension. 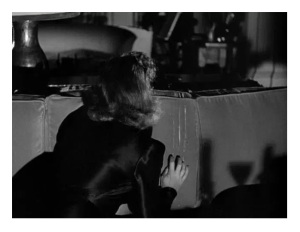 A masterful meditation on love, religion, sexual desire and the female psyche, Cat People was the first movie of legendary producer Val Lewton. The producer soon became famous for emphasizing atmosphere and psychological terror over rabid pandemonium. Cat People is one of Lewton’s finest movies — a fascinating, frightful little film that has influenced countless filmmakers.

Although the film does have a few memorable jump-out-of-your-seat moments, Lewton, director Jacques Tourneur (Out of the Past) and writer DeWitt Bodeen (I Remember Mama) work hard to make the movie more nuanced than your average horror flick. Cat People combines sex and horror so well that the censors of the era didn’t notice that this is a critique of traditional American values and beliefs. 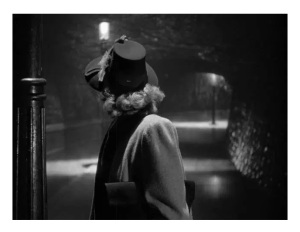 The film cleverly builds suspense around the idea that sexual repression is unhealthy and dangerous. Mainstream morality is to blame for Irena’s chronic insecurities — society demands that she restrains herself from acting in a way contrary to Christian morality. The repression of feeling leads to chaos and the creature that comes out of all this is a sort of “ID” running amok in physical form.

French actress Simone Simon is extraordinarily effective as Irena. Simon’s Irena is an extremely complex character and the actress evokes the perfect mixture of propriety and sexiness. She’s the main reason this is such a good movie. The cast also includes Tom Conway (The Falcon’s Brother), Jane Randolph (Railroaded!), Jack Holt (They Were Expendable) and Alan Napier (Alfred in TV’s Batman).

I can’t praise the film’s technical elements enough. The editing is clever and Nicholas Musuraca’s (The Spiral Staircase) semi-expressionist cinematography is fantastic. Partially because of the film’s very low-budget, Musuraca was given the difficult task of suggesting things that couldn’t possibly be shown at the time the movie was made. You really believe there is some odious thing hidden in the dark shadows. Roy Webb’s (Crossfire) baleful music score is great too.

Sex has always been an integral part of horror, but very few chillers weave elements of love, carnal desire and horror as well as this movie. Cat People is a must-see movie; an almost poetic horror movie that manages to evoke dread and fear without resorting to obvious shock tactics. Cat People is a thinking person’s horror movie. Highly recommended! Remade in 1982. B&W, 73 minutes, Not Rated.