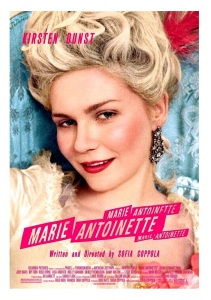 In the 18th century, Austrian princess Marie Antoinette (Kirsten Dunst, Interview with the Vampire) marries the French dauphin Louis XVI (Jason Schwartzman, The Grand Budapest Hotel). Although they don’t get along at first, the royal couple eventually develops genuine affection for each other. Everything goes well until pesty revolutionaries decide to spoil all the fun.

Sofia Coppola’s Marie Antoinette is not for people who demand accuracy above all. If you can’t stand the modernization of historical characters and real-life events you need to run far away from this movie.

According to writer-director Coppola, the French Queen was a trust-fund-baby who turned the Palace of Versailles into a frat house. And she partied hard while listening to some of great pop songs. The look is classic 18th century, but the dialogue and attitudes are pure Millennial — it all works somehow in the end.

This is perhaps one of those films that you are either going to love or hate. I’m speaking from personal experience. For example, I really detested Baz Luhrmann’s The Great Gatsby, a film that uses a similar approach — F. Scott Fitzgerald’s Jazz Age Era drama was bathed in hip-hop angst. I found the modern touches distracting and annoying.

I’m not exactly sure why, but Marie Antoinette worked for me. Perhaps this is due in large part to Coppola, a filmmaker that I tend to like. With the exception of her last film, The Bling Ring, I’ve seen all of Coppola’s movies and I think she’s one of the best, most interesting American directors working today.

Coppola has great instincts. She also has a tendency to make bold moves. I really liked how she took a vilified historical character and made her human. And the so-called anachronisms made sense within the context of Coppola’s reshuffling of motivations. Coppola is perhaps saying that humans haven’t changed all that much over the centuries, that society has evolved, but human nature has remained unchanged.

Marie Antoinette also benefits from Dunst’s intelligent performance. I have followed her career with great interest since her break-through work in Interview with a Vampire and despite constantly strong work I think she remains very underrated. Dunst’s Marie Antoinette has the right amounts of naiveté and arrogance — it is indeed a cunning performance, one of her very best.

Marie Antoinette is a different kind of history lesson. Coppola succeeds in telling the story of the doomed Queen in a new way. The film, at the very least, gives the biopic subgenre a much-needed boost of creativity. Color, 125 minutes, Rated R.