Foreign correspondent Carey Jackson (Robert Montgomery, Night Must Fall), who is desperate for an assignment, agrees to write an article for Home Life, a popular women’s magazine. Jackson soon discovers that the editor of the magazine is none other than his old flame, Linda Gilman (Bette Davis). Jackson and Gilman agree to put personal feelings aside and work on a wedding in Indiana, but war erupts when Gilman realizes that chauvinist Jackson finds the assignment beneath him.

“Man’s best friend is the apple!”

Directed by Bretaigne Windust (Winter Meeting) from a screenplay by Ranald MacDougall (Mildred Pierce and Queen Bee) based on a stage play by Graeme Lorimer and Elaine Tighe, June Bride can be best described as a breezy rom-com whose main selling point is the gamely interaction between its two charismatic movie stars. 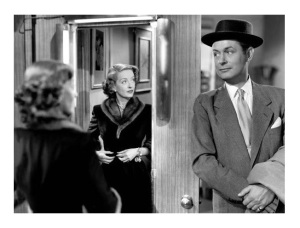 Although June Bride is definitely dated now, this is a delightful piece of fluff. There are hardly any surprises, but the story moves fast enough and the acting is pretty good. Celebrated costume designer Edith Head’s (Samson and Delilah and A Place in the Sun) beautiful gowns also make the film look very chic.

The ending almost made me throw up, though. After establishing Bette Davis’s character as an intelligent, highly successful, self-sufficient career woman (she gives a terrific monologue about gender equality), the script does an about-face and Davis is forced to accept Robert Montgomery’s character’s “superiority.” The fact that Davis, of all people, capitulates so abruptly, so crudely, is enough to make your head spin. 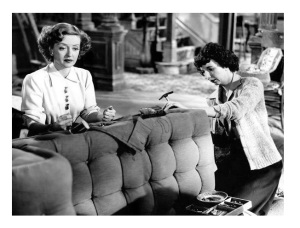 Though Davis rarely made comedies, she is quite good here. Davis, “Queen of High Drama,” is effective because she isn’t really working for laughs. Her role is pretty straightforward and she’s essentially playing Bud Abbott to Montgomery’s Lou Costello. Despite the fact that they allegedly didn’t get along (allegedly, Davis accused Montgomery of trying to upstage her), the actors have nice chemistry.

Sadly, Fay Bainter is wasted in a superfluous role as Davis’s assistant. She had, of course, won an Oscar for playing Davis’s aunt in Jezebel (1938), and I was expecting a lot from her re-teaming with Davis. I was disappointed to see Bainter being reduced to a nothing role. The fine cast also includes Mary Wickes (The Man Who Came to Dinner), Betty Lynn (Payment on Demand), Tom Tully (The Caine Mutiny), Barbara Bates (All About Eve) and Jerome Cowan (Night Has a Thousand Eyes) as Davis’s boss.

Because it was released so close to Winter Meeting (1948), one of Davis’s biggest duds, June Bride‘s under-performance (for a Davis film) at the box office was viewed as a sign that her career was in trouble. Posterity has not been kind to the movie either — it pales in comparison to Davis’s greatest hits. Minus the finale, however, I enjoyed it. It’s an amusing little movie. P.S. Watch for Debbie Reynolds (Singin’ in the Rain) as an extra in the wedding scene. B&W, 96 minutes, Not Rated.