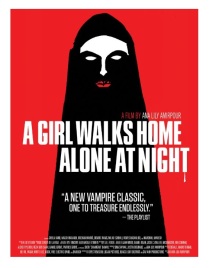 In Bad City, a desolate and dilapidated Iranian town, death has arrived in the form of an unassuming young woman (Sheila Vand, Argo) — she’s a vampire who stalks unsuspected townies. The “Queen of the Damned” unexpectedly forms a strong bond with a local hoodlum (Arash Marandi).

A Girl Walks Home Alone at Night, written and directed by Ana Lily Amirpour, is essentially a mood piece disguised as a horror movie. That’s why it is not really a movie for rabid horror aficionados. If you are looking to see people die in various gruesome ways, this isn’t the film for you — there are a couple of unpleasant scenes, but nothing too graphic. There is an obvious attempt to downplay the incidental nastiness, preferring to concentrate instead on characters and atmosphere.

That being said, this deliberate, slow-paced, gorgeous-looking low-budget movie is one of the most interesting genre films in recent years. If you don’t pay careful attention you may miss the movie’s core theme: alienation in modern society, which fits perfectly into millennial malaise.

A Girl Walks Home Alone at Night is the story of two lonely people who unbeknownst to them are ideally suited to each other. Yes, despite the brooding atmosphere, the murders, the fangs, the blood, the mystery, this is a love story, albeit an unconventional one. In my opinion, it’s a valid approach to romantic entanglements.

The fact that the movie was directed by an Iranian-American woman, not a Silicon Valley hot-shot, may account for the film’s eclectic moods, curious sensibilities, atypical visual choices. Director Amirpour looks inward to gain a better understanding about why people may act the way they do. Amirpour’s existential approach to vampirism recalls the work of Anne Rice. Like author Rice, Amirpour’s style has a touch of romantic melancholy.

In addition, A Girl Walks Home Alone at Night is, despite being filmed in Southern California, very much part of the Iranian New Wave and as such the movie remains a fascinating window into the Iranian culture. At the very least, it’s a great curiosity filled with lots of pleasant surprises.

I’d recommend A Girl Walks Home Alone at Night to people who like their stories a bit more dense than what Hollywood makes on a regular basis. This is not a movie for the “I just want be entertained” crowd. Ana Lily Amirpour is a talent to watch, and I can’t wait to see what she does next. B&W, 101 minutes, Rated R.