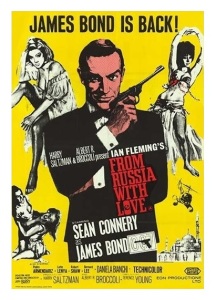 SPECTRE’s member Dr. No is dead and the evil organization wants revenge. The terrorist syndicate sets up an elaborate trap for M16’s James Bond (Sean Connery, The Untouchables) that involves a sexy Russian agent (Daniela Bianchi, Requiem for a Secret Agent) and a Soviet encryption device.

“Bond is still alive and the Lektor is not yet in our possession.”

Second James Bond movie bucks the trend of sequels by being superior to the first film, Dr. No, in almost every aspect. Directed by Terence Young (Wait Until Dark and The Valachi Papers) from a screenplay by Richard Maibaum (The Cockleshell Heroes) and Johanna Harwood (Call Me Bwana), From Russia with Love has better production values, a stronger cast and more exotic locations. There isn’t a single dull moment in the entire film — From Russia with Love builds up so much momentum! 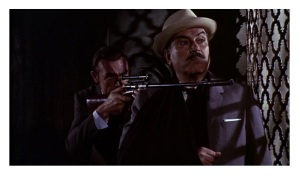 There is not that much action, but the well-constructed narrative kept me glued to the TV screen. I liked the fact that you are made part of the adventure — you travel alongside Bond, encountering new characters and uncovering puzzling clues. The twists and turns are fun and you get to see many beautiful places across the world.

From Russia with Love introduces a host of new ideas which would become important elements of the long-running franchise: SPECTRE’s Ernst Stavro Blofeld makes his appearance in the series and this is the first Bond movie that has a pre-title sequence. It’s also the first movie in the series that has a title song. Curiously, the theme song, performed by British crooner Matt Monro (aka “The Man with the Golden Voice”), is played over the end of the credits and frankly, it’s not all that good.

I did love the fact that the character of Bond received a bit of development. Bond acknowledges that his sexual appetite is pathological. He almost gets killed because of sex and Bond promptly admits that this is a serious flaw in his character. Viewers who always complain about the franchise’s apparent misogyny will find solace in the fact that the producers aren’t totally tone-deaf about their grievances.

The villains are particularly impressive. Robert Shaw (Steven Spielberg’s Jaws) steals a few scenes as SPECTRE’s assassin Donald Grant, who is an imposing and cold killing machine. The brutal fist-fight between Sean Connery and Shaw aboard a moving train is the film’s highlight. Lotte Lenya’s (The Roman Spring of Mrs. Stone) Rosa Klebb is one of the meanest female baddies in the franchise — she’s a scary lady! 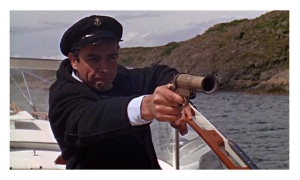 Veteran Mexican actor Pedro Armendáriz (John Ford’s Three Godfathers) is wonderful as Bond’s friend and accomplice Kerim Bey. Although Armendáriz was diagnosed with terminal cancer during the shooting and died shortly after completing his scenes, you will be hard pressed to find a more humane performance in the movie.

From Russia with Love is one of the strongest entries in the franchise, definitely one of Sean Connery’s best (apparently, it is the actor’s favorite Bond movie). The film has a great balance between gritty espionage, humor and romance. The excellent cast and exotic locations are the icing on the cake. Color, 115 minutes, Rated PG.

James Bond will return
in
Goldfinger (1964)