A British spy, James Bond (Sean Connery, Outland), travels to Jamaica to investigate the disappearance of another agent and his secretary. During the course of his investigation, Bond encounters a mad genius, Dr. No (Joseph Wiseman, Detective Story), who is determined to put a stop to the U.S. space program.

Dr. No is the very first Bond movie, and like most trend-setting films, this relatively small-budget movie is economical, straightforward and very effective. It’s a surprisingly gritty and suspenseful espionage tale that manages to establish the blueprint for an endless series of movies that in years to come, despite the fact that this is a very British franchise, will become a huge part of American pop culture. 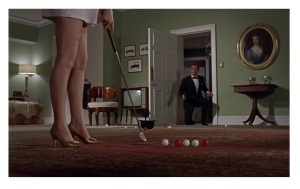 Being the first means that Dr. No is still a work in progress. There is no punchy title song, no over-the-top gadgets, and “Q” (M16’s master of gadgets) is played by Peter Burton (Lawrence of Arabia), not fan-favorite Desmond Llewelyn. We do get to see title designer Maurice Binder’s (Charade and Barbarella) imaginative work for the very first time, accompanied by Monty Norman’s legendary “Bond Theme.”

Interestingly, Dr. No delves into a few hot political issues. The film dares to question the conflict between the United States and the Soviet Union right around the time of the tense Cuban Missile Crisis. Even more fascinating is how the movie mocks the ideals behind the Cold War — the film seems eager to show how ineffective American Intelligence is, a definitely controversial topic in the post-911 world.

Ian Fleming’s book was adapted by Richard Maibaum (Chitty Chitty Bang Bang), Berkely Mather and Johanna Harwood. Tightly and stylishly directed by Terence Young (Wait Until Dark), Dr. No is full of memorable moments: Sean Connery and Ursula Andress’s (The Blue Max and Clash of the Titans) introductions, the confrontation between Bond and archenemy Dr. No, etc. The climax is very exciting too.

As I said before, Dr. No has a relatively low budget, but it all looks so polished, so elegant — Ted Moore’s (A Man for All Seasons and The Prime of Miss Jean Brodie) camera work is outstanding. Celebrated production designer Ken Adam’s (Stanley Kubrick’s Dr. Strangelove or: How I Learned to Stop Worrying and Love the Bomb and Barry Lyndon) sets are fantastic! The producers proved with this movie that you don’t have to spend a lot of money in order to create a credible adventure tale.

Connery is excellent in the role that made him a star. He is witty, dashing and charismatic; he is the perfect hero. Connery makes us believe that he can both seduce the beautiful dames and destroy the powerful villains. Personally, I had forgotten how mean Connery’s Bond is — he seems to enjoy killing people in cold blood!

Dr. No has lost none of its original appeal. It’s great pulpy entertainment that has stood the test of time — Dr. No is a thrilling and fun movie. While it is true that the first Bond adventure lacks the spectacular action-sequences and visuals of subsequent films, there is no denying that the first movie in the long franchise still packs a punch. Highly recommended! Color, 110 minutes, Rated PG.

James Bond will return
in
From Russia with Love (1963)