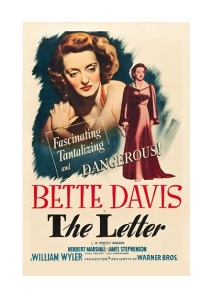 In Southeast Asia, a rubber plantation manager’s wife, Leslie Crosbie (Bette Davis), shoots a man to death after he supposedly tried to rape her. However, a letter Leslie wrote the night of the shooting contradicts her version of the events.

“With all my heart, I still love the man I killed.”

Meticulously directed by William Wyler (Wuthering Heights) from a screenplay by Howard Koch (Casablanca) based upon British writer W. Somerset Maugham’s 1927 play of the same name, The Letter is an impressive thriller that still has much of its original power. This is a film I feel compelled to revisit often, and one movie that never fails to blow me away — it’s extraordinary in every possible way. 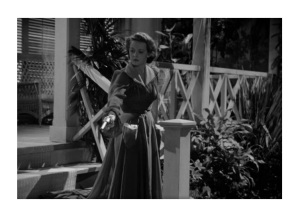 Although The Letter is rarely classified as classic noir, the movie is one of the best examples of that style of filmmaking. Perhaps filmmaker Paul Schrader (American Gigolo and Cat People) was right after all. He insisted that “noir is not a genre, but rather is defined by more subtle stylistic qualities of tone and mood.”

The challenge here was to turn a stage play into a valid cinematic experience, a daunting task that director Wyler approached with much enthusiasm and imagination, demonstrating what great craftsmanship is all about. Wyler was undoubtedly assisted by Tony Gaudio’s (The Old Maid) magisterial cinematography, Warren Low’s (All This, and Heaven Too) and George Amy’s (Yankee Doodle Dandy) clever editing, and Max Steiner’s (Gone with the Wind) atmospheric music score. 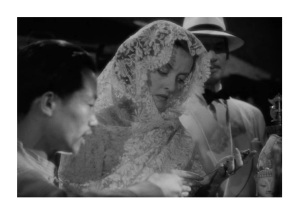 The Letter is full of intriguing touches. Especially brilliant is the opening sequence. It’s a very effective montage that has the effect of pulling you into the story right away. Additionally, the main character’s constant knitting — like a spider spinning a web — and her obsession with the moon — some people believe that the moon influences violent behavior — are fascinating elements that enhance the storyline.

And there’s Bette Davis. Critic Pauline Kael wrote, “Davis gives what is very likely the best study of female sexual hypocrisy in film history.” Davis’s Leslie is definitely one of cinema’s most fascinating anti-heroines, and the actress hits all the right notes. Davis rarely moves her body and Wyler often photographs her from the back, yet she is able to project all kinds of complex emotions. It’s a brilliant performance. 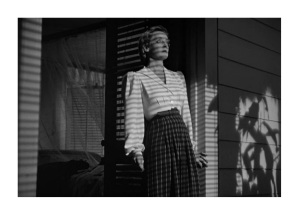 In addition to Davis’s superb work, there are a few other performances that deserve to be mentioned. James Stephenson (Shining Victory) plays Davis’s lawyer with quiet authority — he received a well-deserved Oscar nomination. Gale Sondergaard (Anthony Adverse) is imposing as the Eurasian woman who blackmails Davis. Herbert Marshall (The Little Foxes) is terrific as Davis’s devoted husband.

The Letter deseves to be placed alongside the best film noirs — it’s a superior thriller with one of Bette Davis’s best performances. There are multiple versions of W. Somerset Maugham’s famous story: Jean de Limur’s 1929 version, starring Jeanne Eagels, The Unfaithful, a loose adaptation of the play, with Anne Sheridan (Angels with Dirty Faces) in the title role, and a scene-for-scene TV remake, with Lee Remick (Days of Wine and Roses) as the conniving Leslie Crosbie. B&W, 96 minutes, Not Rated.