A private dick, Ted Shayne (Warren William, Three on a Match), sees an easy payday when a mysterious woman, Valerie Purvis (Bette Davis), hires him to follow a man. The assignment looks simple enough, but after Shayne’s partner is murdered, the sleuth realizes that there is more than meets the eye about his client.

” I mistrust a man who says he isn’t working for himself.”

Directed by William Dieterle (Juarez), Satan Met A Lady suffers from all kinds of problems. The jarring tonal shifts are unpleasant to say the least. The humor is intrusive and feels out-of-place in an otherwise mean-spirited story. I think writer Brown Holmes was trying to imitate the popular The Thin Man (another Hammett story), which is a hilarious whodunit. Needless to say this is a poor facsimile.

Today, Satan Met A Lady is mostly remembered as the film that precipitated Bette Davis’s well-publicized 1936 rebellion. Davis was determined to never again appear in a B-movie so she left the country to make films in Europe. She was under an exclusive contract with Warner Bros. and the studio had no choice but to take her to court. Davis lost the case, but the quality of her films did improve. 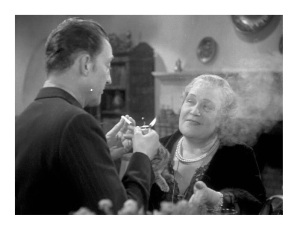 Davis plays the role made famous by Mary Astor (The Great Lie) in the 1941 version, and quite frankly, she’s not very good. Warren William isn’t very convincing either. An easy-going actor who made a career playing cynical characters, William looks uncomfortable in the role of the jaded gumshoe (a thinly-disguised Sam Spade).

Satan Met A Lady is more of a curiosity than anything else. I quite disliked it. Bette Davis called it “the worst movie of my career” and she was probably right. A sloppy script and Dieterle’s uninspired direction are to blame. This is actually the second of three film adaptations of Hammett’s The Maltese Falcon (the 1931 version is pretty good). Anyhow, I couldn’t get over the fact that they took such a great book and turned it into one silly B-movie. B&W, 75 minutes, Not Rated.