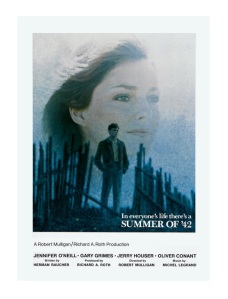 In 1942, while spending the summer in a New England beach colony, a 15-year-old kid (Gary Grimes, Cahill U.S. Marshal) develops a crush on a 22-year-old woman (Jennifer O’Neill, David Cronenberg’s Scanners), whose husband is away at war.

“Nothing from that first day I saw her and no one that has happened to me since, has ever been as frightening and as confusing.”

Perceptively directed by Robert Mulligan from Herman Raucher’s screenplay, Summer of ’42 is a captivating coming-of-age story about what was like to grow up amid the uncertain years of World War II. Even though it takes place during a quiet summer in 1942, the movie transcends its setting by presenting many issues in such a way that the story could take place in any region and/or time period. 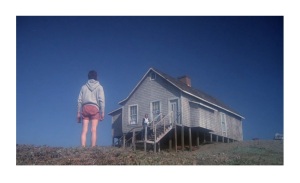 Director Mulligan infuses Summer of ’42 with a combination of nostalgia, poignancy, and realism that is sustained from the opening credits all the way to the film’s bittersweet ending. This is not your typical teen drama, but rather an evocative examination of the pains and frustrations that come with adolescence, and the isolation and insecurities that are ignited at the home-front during times of war.

Summer of ‘42 was a smash hit that took most critics and moviegoers by surprise. It was released at the height of the Vietnam conflict, so the timing couldn’t have been better. Audiences obviously connected with a movie about a teenager facing growing pains during a time of war. The film quickly became one of the highest grossing movies of the year, and unwittingly kicked off the nostalgia craze of the ’70s. 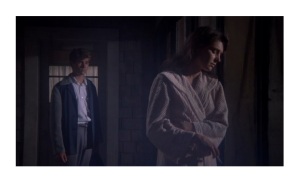 Robert Surtees’s (The Last Picture Show) gorgeous camera work is at least partially responsible for the film’s enormous success. Surtees uses a soft focus technique in order to give the entire film a nostalgic look. The film is supposed to be someone’s recollections of a time long past, so the softness of the image actually makes sense within the context of the story, very much giving the film a dream-like quality.

Finally, I can’t finish without praising the Oscar-winning musical score written by French composer by Michel Legrand (The Umbrellas of Cherbourg and The Thomas Crown Affair). The piano-forward score is simple yet immensely satisfying. By the way, the movie is narrated in a low-key manner by director Mulligan.

Made with a limited budget, and relying on the talents of a group of unknown actors, Summer of ’42 proved that there was still a market for old-fashioned, romantic dramas. Sincere performances, sensitive direction, and a great, wonderfully romantic score by Michel Legrand combine to make this film a classy drama of the highest order. If you are an action junkie you might as well skip this one, but if you are a true romantic cinephile, this is a no-brainer. Color, 103 minutes, Rated PG.