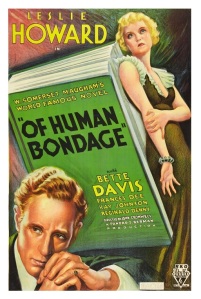 After unsuccessfully dabbling in the world of the arts, club-footed Philip Carey (Leslie Howard, Pygmalion) decides to pursue a career in the medical field. Sometime later, at a local restaurant, Philip meets a waitress, Mildred Rogers (Bette Davis), and develops a crush on her. The one-sided relationship causes Philip endless misery.

Of Human Bondage is based on British playwright and novelist W. Somerset Maugham’s 1915 semi-autobiographical book of the same name. Writer Lester Cohen (Break of Hearts) had the arduous task of transforming a sprawling period piece into a relatively short, contemporary movie — I read the book in college, and if memory serves me well, Maugham’s novel was long and dense. 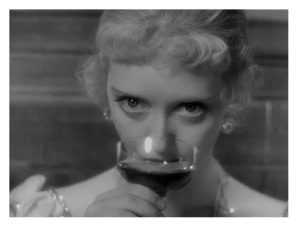 Although a tad too condensed version of a complex novel, Of Human Bondage ultimately works because it distills with great efficiency the book’s main theme of masochism. And the movie is acted and directed in a vivid and unconventional (for 1934) manner — it’s an unusual Hollywood movie!

Of Human Bondage changed Bette Davis from a minor Warner Bros. contract player to a dramatic actor of the first order. Time magazine called Davis’s work “probably the best performance ever recorded on the screen by a U.S. actress.” Davis’s Mildred Rogers was definitely one of Hollywood’s rawest performances up to that point. Of Human Bondage had a sensational run at New York’s Radio City Music Hall, and it is still one of the most interesting films of Hollywood’s Golden Era. 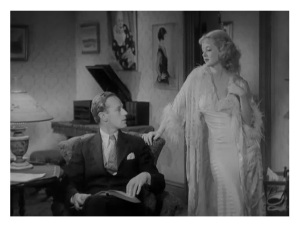 Every single high-profile actress — from Katharine Hepburn and Margaret Sullavan to Ginger Rogers — turned down the role of Mildred. Davis always said that she was loaned out to RKO only after she begged for months. The truth is less dramatic: Warners desperately needed Irene Dunne (Cimarron) for a musical — the now-forgotten Sweet Adeline — and a swap was arranged between the two studios. Davis knew that this was her last chance to make an impression, and she seized the opportunity.

Whatever you might think of Davis’s performance — too mannered, over the top, etc. — even using today’s standards is something to behold. What makes her work so fascinating to watch is director John Cromwell’s (Algiers and Since You Went Away) almost mystical approach to Davis’s energy. Years later, when director John Huston directed Davis in a film (In This Our Life), he referred to that raw energy as “a demon within which threatens to break out and eat everybody.” 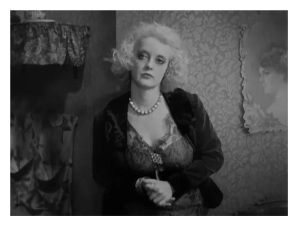 Cromwell himself speculated that Davis’s so-called “demon” was nothing but repressed fury. At the time Of Human Bondage was made, not only was Davis’s career on life support, but her marriage as well. It’s quite possible that Cromwell made the conscious decision to tap into her deep pent-up frustrations. But it’s not all “fire and music.” Cromwell carefully guides Davis, allowing her to show Mildred’s vulnerabilities — she’s a sad woman who has become a monster in order to survive in a cruel world.

Although Davis received most of the accolades, I can’t possibly dismiss Leslie Howard’s contributions to the movie. In the face of fierce competition Howard opts not to compete but to provide a refuge from the tempest. He underplays beautifully, helping establish a nice balance between Davis’s excesses and his brand of invisible acting. The same can be said of Frances Dee (I Walked with a Zombie), whose elegance and tenderness provide a nice contrast to Davis’s viciousness. The cast also includes Kay Johnson (Thirteen Women) and Alan Hale (The Sea Hawk).

Of Human Bondage isn’t a perfect movie. However, the film does contain a truly great performance, the kind of unforgettable work that only occurs once in a while; Davis is absolutely brilliant as Mildred. Max Steiner’s (Now, Voyager) simple yet beautiful music score is an added bonus. Remade in 1946, with Paul Henried and Eleanor Parker, and in 1964, with Laurence Harvey and Kim Novak. B&W, 85 minutes, Not Rated.