Julie Wilding (Isabelle Mejias, Meatballs III) is a teenage girl whose pathological love for her father (Anthony Franciosa, The Long Hot Summer) threatens to ruin her life. Julie is determined to keep her father all for herself, and she will stop at nothing, including getting rid of her own mother, to achieve her goal.

While the Electra complex is overplayed a bit, Julie Darling (aka Daughter of Death), written by Paul Nicholas and Maurice Smith (The Joys of Jezebel), directed by Nicholas (Chained Heat), is a low-budget, entertaining psychological drama with good acting and serviceable direction. 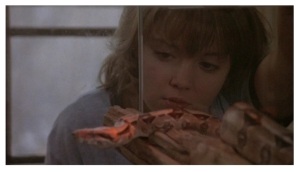 I liked it better than the more famous The Bad Seed (1956), which this movie resembles somewhat. It’s pretty wicked — in one scene the teen fantasizes about having sex with her own father — but it’s not overly sleazy. One must, of course, make allowances for the film’s flaws — it is after all drive-in fodder — but, as I said before, it is a fun thriller, well-acted and well-directed.

Isabelle Mejias does a very good job as the teen psychopath. She never resorts to those evil glances you see in movies about “demon children.” Mejias, who bears a strong resemblance to beloved cult actor Donna Wilkes (Blood Song), appeared in a handful of movies before disappearing completely; it’s just too bad because she has an appealing girl-next-door quality. 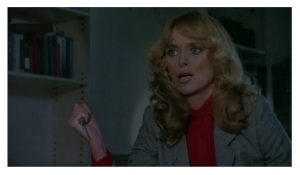 The immensely sexy Sybil Danning (Battle Beyond the Stars and They’re Playing with Fire) plays a normal person for a change and she is quite good at being ordinary. Danning does have a brief nude scene, but it makes sense within the context of the movie. Veteran actor Anthony Franciosa is effective as Mejias’s father. Julie Darling was shot on location in Germany (that explains Austrian Danning’s presence) and Canada.

Julie Darling has fallen into the pits of public domain hell, so good luck finding an acceptable print. The now-defunct Code Red released the movie on DVD, and that’s probably the best the movie has ever looked since its theatrical release. This is a nice little film that fans of underground cinema will enjoy. Color, 100 minutes, Rated R.