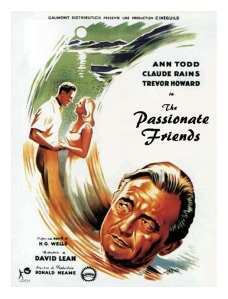 Mary Justin (Ann Todd, The Sound Barrier) is content with her marriage to rich financier Howard Justin (Claude Rains, Mr. Skeffington). Mary has everything that she ever wanted; money, stability and a husband who adores her. The Justins attend a New Year’s Eve party where Mary meets her ex-boyfriend Steve (Trevor Howard, The Third Man), and the unexpected encounter rekindles her passionate love for Steve.

“How could you love me and yet marry someone else?”

In an interview, director David Lean stated that with The Passionate Friends he had intended to capture “thoughts” on film (that’s why the movie is short on dialogue and has lots of close-ups), but felt he had failed miserably. Lean was wrong: the filmmaker did a spectacularly good job conveying the idea of “thought.” Using judicious editing and innovative camera angles, Lean takes us inside the characters’ minds.

Guy Green’s (Great Expectations and Captain Horatio Hornblower) cinematography is particularly impressive. Green shoots some fantastic scenes, specifically the exciting climax at a train station. The unusual camera angles make the film both involving and visually exciting. Perhaps the fact that Lean was at the time seeing a psychoanalyst influenced his choices. I don’t know, but it worked for me.

Based upon H.G. Wells’s 1913 novel of the same name, The Passionate Friends was conceived in an atmosphere of anxiety and chaos. The title could very well have referred to the passionate people who made the film. It began as Ronald Neame (The Poseidon Adventure) and writer Eric Ambler’s pet project. Neame was hoping to direct the movie but, for reasons that remain unclear to me, Lean took over the movie and unceremoniously pushed Neame and Ambler aside.

Over the years, Lean refused to speak of the film. Ambler and Neame practically disowned the movie. Considering the atmosphere of discord that surrounded the film, it’s nothing short of a miracle that the film works as well as it does. It’s a bit cold around the edges, but it’s a complex and fascinating psychological melodrama.

British star Anne Todd was understandably annoyed by the turmoil, and the great Claude Rains, who had been brought in from Hollywood at considerable expense, was not all that happy with what looked like a very unprofessional atmosphere. Yet Todd ended up marrying Lean shortly after the completion of the movie, and Rains developed a close friendship with Lean that lasted until the actor’s death in 1967 — that’s cinema for you, so much love came out of so much anger and frustration!

The Passionate Friends is not on the artistic level of The Bridge on the River Kwai (1957) or Lawrence of Arabia (1962), but it is a film that offers plenty of goodies, especially for Leanphiles — it’s a little gem! I loved the performances, the story, the superbly constructed flashback scenes, everything about it is top class. Give it a chance, I promise you won’t be disappointed. With Wilfrid Hyde-White (My Fair Lady) and Arthur Howard (The Man in the White Suit). B&W, 95 minutes, Not Rated.