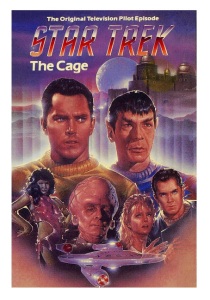 UFP’s (United Federation of Planets) spaceship USS Enterprise, commanded by Captain Christopher Pike (Jeffrey Hunter, The Searchers), answers a distress call from the mysterious planet Talos IV. Once on the planet, the crew finds a group of scientists who were reported missing years ago. However, things aren’t as they appear to be.

We all know the story. After NBC green-lighted Gene Roddenberry’s “wagon-to-the-stars” idea, the producer submitted a few scripts for the approval of the top brass. The studio picked one, but after watching the final product, they had second thoughts. “Too cerebral” and “not enough action” were the main complaints. Interestingly, the TV executives blamed themselves — that’s a first! — for selecting the wrong script, and they allowed Roddenberry to produce a second pilot and the rest is history. 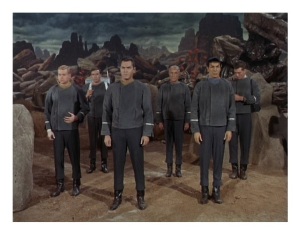 The unused pilot was eventually re-edited into one of the show’s most popular episodes, The Menagerie. Thankfully, the original pilot has survived and we all can judge with our own eyes the pros and cons of the first voyage of the starship Enterprise. My first impression is of disbelief; this “reject” is not only quite good, but also provides viewers with a fascinating window into a cultural phenomenon in its infancy.

The Cage is gutsy and visionary. From a mixed-gender, mixed-race crew to innovative sets and visual effects, the show is a trailblazer in every sense of the word. In the tradition of Tolkien, producer Roddenberry managed to create a universe from the ground up, not an easy task by any means. Unlike modern science fiction shows, the emphasis is on story and characters. The visuals enhance rather than distract from the storyline. 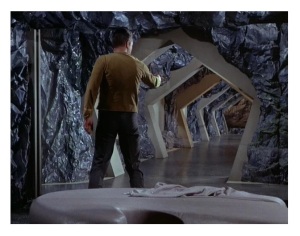 Some elements didn’t survive the second pilot (Season One’s third episode, Where No Man Has Gone Before). The network vehemently objected to the humorless, all-business second-in-command Number One, played by Majel “Mrs. Roddenberry” Barrett. They couldn’t accept the idea of a cold-blooded woman so Roddenberry relented.

The producer was also forced to get rid of John Hoyt (When Worlds Collide), who plays the ship’s doctor (he’s a bit too old). But Roddenberry would not let go of Spock, a character TV executives found unappealing. He insisted that an alien aboard the ship was needed in order to remind viewers that this was a science fiction show. 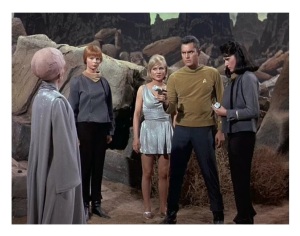 The biggest casualty was Captain Pike, played by movie star Jeffrey Hunter. The actor was allegedly released from his contract after Roddenberry found most of his demands unacceptable. In retrospective, Hunter’s departure was the best thing that ever happened to the show. As good as Hunter is, I don’t think Hunter’s world-weary Pike would have worked well within Roddenberry’s optimism. Hunter died a few years later anyway, so his exit seems almost like an act of fate.

However, most of the things that Trekkies love about the show are here. Composer Alexander Courage’s (The Left Handed Gun and Day of the Outlaw) memorable theme helps establish an atmosphere of adventure and wonder. The visual effects, costumes and sets suffered little change (Matt Jefferies designed the Enterprise).