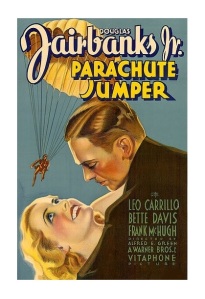 Bill (Douglas Fairbanks Jr., Sinbad The Sailor) and Toodles (Frank McHugh, The Front Page) are penniless ex-Marines looking for employment in the Big Apple. The unemployed men meet an equally destitute young woman (Bette Davis) and they all decide to share an apartment. Later, Bill finds a job as a chauffeur for a gangster’s mistress and this leads to all sorts of complications.

“I’m a stenographer without a typewriter to pound or a piece of gum to chew.”

Films about relatively decent men pushed into the world of crime by unscrupulous racketeers were the bread and butter of Pre-Code Hollywood. Produced by Warner Bros., Parachute Jumper perfectly encapsulates Depression-era angst but sadly, despite a really good cast, this isn’t a very good movie. 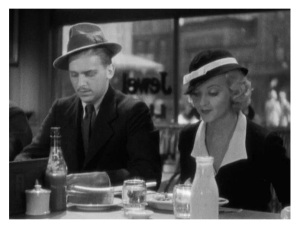 Directed by Alfred E. Green (The Jolson Story), Parachute Jumper moves fast enough so you don’t have time to think about its implausibilities. The film does have some entertaining aerial stunts. When all is said and done, this is nothing but a cheap programmer with very few redeeming qualities. 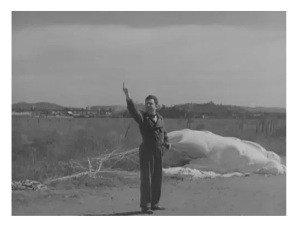 Character actor Frank McHugh’s easy-going charm is the best thing about the movie. In one scene, he gives a pilot the middle finger (yes, that’s right), something that you won’t see in any other film from that era! Leo Carrillo (Viva Villa!) is also excellent as a gangster. The supporting cast also includes Leon Ames (Meet Me in St. Louis), Lyle Talbot (Glen or Glenda) and Harold Huber (The Thin Man). The great Walter Brennan (The Westerner) has a bit as a soda clerk.

Parachute Jumper is a bland B-movie, mostly remembered today for being the only pairing of Douglas Fairbanks Jr. and Bette Davis. Perhaps the best indication of the film’s poor quality is director Robert Aldrich’s decision to use footage from Parachute Jumper to illustrate Jane’s failure as a film actress in the classic horror movie What Ever Happened to Baby Jane? (1962). B&W, 65 minutes, Not Rated.