In a dystopian world, the last survivors of an Ice Age try to stay alive. Seal hunter, Essex (Paul Newman, The Verdict), and his wife, Vivia (Brigitte Fossey, Forbidden Games), look for food and shelter in a city where the main pastime is a board game called “Quintet.” After Vivia is murdered, Essex inadvertently becomes a key player in the highly addictive and dangerous game.

This uber-somber post-apocalyptic saga was a huge box-office and critical disaster. Quintet, directed by Robert Altman (Nashville and Short Cuts), is a movie still searching for love. That’s too bad because this is one of Altman’s most intriguing experiments. 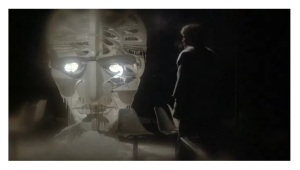 Quintet‘s reputation as a tedious head-scratcher is mind-boggling. Sure, it’s probably Altman’s least accessible venture. This is the antithesis of a Hollywood crowd-pleaser. But as a longtime fan of Atlman’s work, I took great delight in the film’s many fascinating ideas. I’m a sucker for this kind of bizarre stuff. After all, I’m a huge fan of John Boorman’s loony Zardoz, another derisive sci-fi opus.

Most of the film takes place in one location. Also, it’s as slow as molasses, but I liked the way the plot is in no hurry to go anywhere. Altman’s usual attention to minor details really pays off. He went as far as creating the board game that’s at the core of the story. The shooting was particularly difficult. Altman insisted that the film could only be shot in a remote location in Canada and the freezing weather put extra strains on the crew and actors — the steam that comes out of actors’ mouths is real!

Needless to say, acting takes a backseat to the story and visuals. Paul Newman is good, but he’s a mere cipher. Vittorio Gassman (Big Deal on Madonna Street) does have a few wonderful moments. The same goes for Fernando Rey (The French Connection), who plays the man in charge of the “Quintet” game.

French cinematographer Jean Boffety’s (I Love You, I Love You and César and Rosalie) camerawork is the film’s real star; it’s appropriately drab and moody as hell. The nice music score is by Tom Pierson (A Perfect Couple).

Quintet is an acquired taste. Your sensibilities will dictate how you react to it: brilliant or a pretentious mess. Personally, it’s destined to become one of my favorite Altman films. With Bibi Andersson (Persona), Nina van Pallandt (American Gigolo), and Craig Richard Nelson (Three Women). Color, 118 minutes, Rated R.