Trish Van Devere (The Changeling and The Hearse) plays Amy, a twenty-seven-year-old housewife who falls into deep depression when her husband (Paul Jenkins, I Never Promised You a Rose Garden) inexplicably leaves her for good. The film deals with Amy’s struggles to gain control over her life.

Sensitively directed by Mel Stuart (Willy Wonka & the Chocolate Factory), One Is a Lonely Number (aka Two Is a Happy Number) explores 1970s female angst with humor and intelligence. Although neither as insightful as Paul Mazursky’s An Unmarried Woman (1978) nor as funny as Frank Perry’s Diary of a Mad Housewife (1970), the film does a good job illustrating the problems women faced in the ’70s. 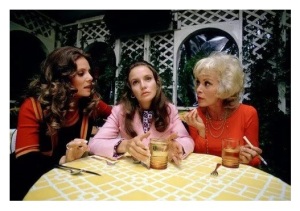 Sadly, none of Van Devere’s big films  — The Day of the Dolphin and The Savage Is Loose — were a success, thus she never became a major player in Hollywood. But the underrated Van Devere has done mostly good work, often co-starring with husband George C. Scott (Patton) — Amy is her best role to date.

One Is a Lonely Number is a fine drama with an excellent performance from the talented Van Devere. Michel Legrand’s (Summer of ’42) music score is effective too. Written, believe it or not, by the man who gave us The Omen, David Seltzer! Kathleen Quinlan’s (The Doors and Apollo 13) film debut. Color, 97 minutes, Rated R.